What's the Census all About?

As a member of the Chevron Advocacy Network, we know you recognize the importance of civic engagement, such as voting and advocating for your community. This year we all have an especially important form of civic engagement to perform: the U.S. Census. The Chevron Advocacy Network has partnered with the U.S. Census Bureau to build awareness of and facilitate participation in the 2020 Census.

Every 10 years, the population of the U.S. and its five territories (Puerto Rico, American Samoa, the Commonwealth of the Northern Mariana Islands, Guam, and the U.S. Virgin Islands) is counted. This tally helps apportion our federal representatives, distribute Electoral College votes, and appropriate funding for public services such as infrastructure, education, and housing. While the technology has changed the ways people are counted, the practice of the census dates back to the founding years of our nation. Since 1790, there has been a census every 10 years and participating in the census is required by law.

Why do we need the census?

We cannot overstate the importance of the census. By counting every person in the United States, lawmakers at every level are able to gain insights into communities and provide funding for key services. Census data is used to allocate the billions of dollars of federal funds that go to hospitals, fire departments, schools, roads, and other important public services.

At the state level, lawmakers or Commissions use the data from the U.S. Census to draw congressional and state legislative districts in order to reflect population changes.

What happens if I don’t respond to the census?

By law, everyone must respond to the census. If you don’t respond, you can expect the Census Bureau to follow up in person by knocking on your door until they collect the information. You can also face penalties of up to $5,000. Your participation in the census is critical to your local region. Officials believe that each person who isn’t counted will cost their county about $1,500 in lost funds per year.

The Census Bureau uses your confidential survey answers to only create statistics and is legally bound to strict confidentiality requirements. Individual records are not shared with anyone, including federal agencies and law enforcement entities. The census will ask questions about a person’s place of birth, citizenship, and year of entry into the United States to create data about citizens, noncitizens, and the foreign-born population. These results will allow policymakers to evaluate their laws while also helping tailor services to accommodate cultural differences.

How do I participate?

By April 1, 2020 everyone in the country (and territories) will receive a notice to take part in the census. This year, the census can be answered three different ways: online, by phone and by mail. This year, for the first time ever, the majority of recipients will be encouraged to respond online. Most households will receive detailed information on participation sometime in March (some rural areas will receive information sooner), including how to participate and any other relevant information. 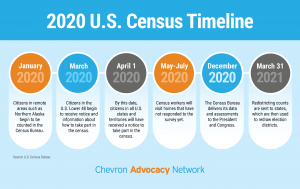 Take action
Participation in the census is one of the most important ways to advocate for your community. Your answers to this simple survey can increase government investment in your neighborhood and ensure your community is well-represented in policy decisions made at the state and federal levels. The U.S. Census will be mailed directly to you by the end of March. To complete the census online, simply have the 12-digit Census ID found in the materials mailed to you or left at your door and visit my2020census.gov.