What are Severance Taxes?

Lately Aunt Edna has been hearing a lot about taxes, specifically accusations that the oil and natural gas industry does not pay its fair share to states where operations take place. Before she hastily makes accusations, she asks you to share the facts.

What is a severance tax?

A tax imposed by states when naturally occurring resources are removed from the earth during industry operations. These resources typically include oil, natural gas, coal, and timber. In regards to oil and natural gas development, states usually base their severance tax rate on the value or volume of the oil and gas produced. A severance tax is a form of revenue to the state and is separate from other state and federal taxes paid by the business.

In Texas for example, the oil severance tax is set at 4.6% of the market value of oil produced in the state. In 2019, this tax combined with the severance tax on natural gas contributed to half of the more than $16 billion in tax revenue generated by the industry. That $16 billion directly benefits the state and local economies and provides the equivalent of $44 million a day for schools, universities, roads and first responders. According to the Texas Oil and Gas Association, this funding from the industry’s production in Texas has grown by more than 15 percent each of the last three years. Texas leads the nation in both oil and natural gas production, with development providing significant revenue for the state.

Many other states benefit from ongoing oil and natural gas production as well. In 2018, the industry paid more than $2.2 billion in taxes and royalties (including severance taxes) in New Mexico, and nearly $1 billion in Colorado.

Do all states have severance tax?

There are thirty-four states with a severance tax. While not all states call it a severance tax, most impose some form of tax or fee on the extraction of their natural resources.

For example, California imposes fees based on the volume of oil produced and Pennsylvania collects revenues through an impact fee. To learn more about severance tax in your state, click here. 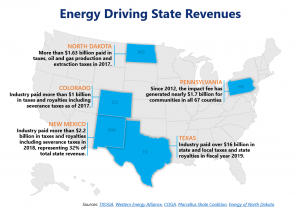 How do states use the funds generated from a severance tax?

The funds are generally used to support and further develop the state’s infrastructure. This includes public costs for city planning, road services, reconstruction, schools, social services, and public safety. Funds may also go toward the state’s industry regulatory agencies, or to fund conservation and environmental projects. Each state distributes the tax revenue in a different way, but most often, it is deposited into the state’s general fund.

What is the situation with the proposed severance tax in Pennsylvania?

For the fifth time in five years, Pennsylvania Governor Tom Wolf has requested that a severance tax be levied on oil and natural gas produced. Pennsylvania, however, already levies an impact fee on the production of oil and natural gas and further taxation would be excessive. Since 2012, Pennsylvania has generated nearly $1.7 billion in new revenues from the existing impact fee, a clear sign the current system is working, and the industry is paying its fair share with the funds being reinvested in communities.

The proposed severance tax would be counterproductive and ultimately hurt consumers by increasing energy costs and threatening jobs. If enacted, this tax could discourage further investment and development and risk the loss of revenues that have helped bolster communities and infrastructure in the state. 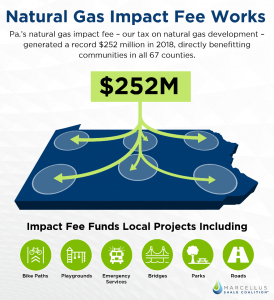 Source: Marcellus Shale Coalition
Bottom line: Severance taxes are one of many ways the oil and natural gas industry supports state economies. Appropriate taxation, through severance taxes or impact fees, must take a balanced approach to ensure industry is able to continue to operate while providing important contributions to the state through jobs and revenue.