Over the holidays, a lot of the questions we received from Aunt Edna revolved around a familiar topic: fracking. Specifically, “Can’t we get rid of fracking? I don’t see any benefit to using it.”

Given how anti-oil and gas activists frame their talking points, it’s easy for Aunt Edna to believe that fracking is new, scary…and unnecessary.

But that couldn’t be further from the truth. Let’s take a quick look at the technology and, more importantly, the many ways fracking has improved our way of life.

In decades past, much of the development of oil and natural gas was done “conventionally,” or using vertical wells.

Over time, scientists, engineers, and geologists worked to unite a technology we’ve been using for decades – hydraulic fracturing or fracking – with a new technique – directional drilling – to reach previously inaccessible resources locked in tight shale rocks almost a mile below the surface.

You can learn more about how fracking works here and here. 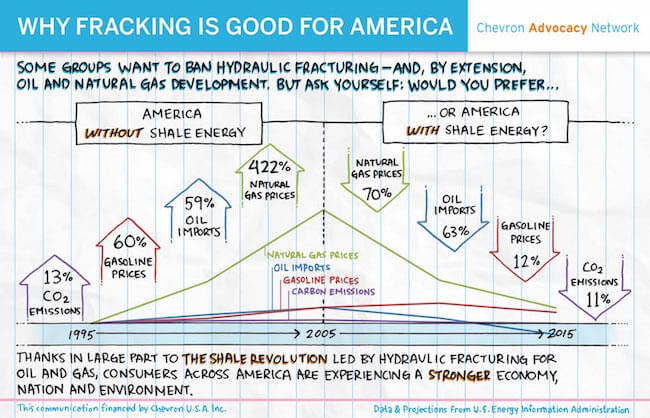 Share this infographic on your social networks today by clicking here.

The infographic above looks at four key factors and demonstrates how things have improved over the last 20 years thanks in large part to hydraulic fracturing.

According to the latest report from the International Energy Administration (IEA), global CO2 remained flat for the third year in a row in 2016 at the same time the global economy grew 3.1 percent.

According to the latest data from the U.S. Energy Information Administration (EIA), the United States is producing crude oil at monthly levels not seen since the 1970s – roughly 9.7 million barrels per day (b/d). EIA projections indicate that annual U.S. production will reach a record high of 6.4 million b/d in 2018.

The record high oil production is a trend that is setting the U.S. on a path to become a net exporter of energy by 2026, according to the EIA’s Annual Energy Outlook 2017.

The price of gasoline increased steadily through the 1990s and had cruised to over $4 per gallon in 2008, according to data from the Bureau of Labor Statistics.

According to the Energy Information Administration’s (EIA) most recent report, “in 2016, about 143.37 billion gallons (or about 3.41 billion barrels) of finished motor gasoline were consumed in the United States, a daily average of about 391.73 million gallons (or about 9.33 million barrels per day). This was the largest amount of annual motor gasoline consumption on record.”

This increase in consumption is attributed to lower gas prices at the pump. Over summer 2017, GasBuddy reports the average nationwide gasoline price fell to $2.35 a gallon, the lowest average price for this point of the year since 2005. The American Automobile Association (AAA) reported that Americans saved an average of more than $550 on gasoline costs in 2016, when consumption hit a record high.

And a 2016 report from the Institute for 21st Century Energy Accountability Series, which looked at what would happen if fracking were to be banned nationally, found gasoline prices would nearly double to their 2008 levels if not for shale.

With an increase in natural gas consumption and production in the U.S., we’ve also seen a decrease in CO2 emissions, thanks to natural gas development and the use of natural gas as a growing electric generation source. This International Energy Agency (IEA) report confirms, “In the United States, emissions declined by 2%, as a large switch from coal to natural gas use in electricity generation took place.”

In short, thanks in large part to the oil and gas development made possible by fracking, America is stronger. We have a more resilient economy and a cleaner environment compared to just ten years ago.

‘Answering Aunt Edna’ is a recurring series that is designed to help CAN members answer tough questions from their friends, family and neighbors.